Jamstack in 2021: Why Developers and Marketing Strategists NEED to Upgrade Their Content Stack 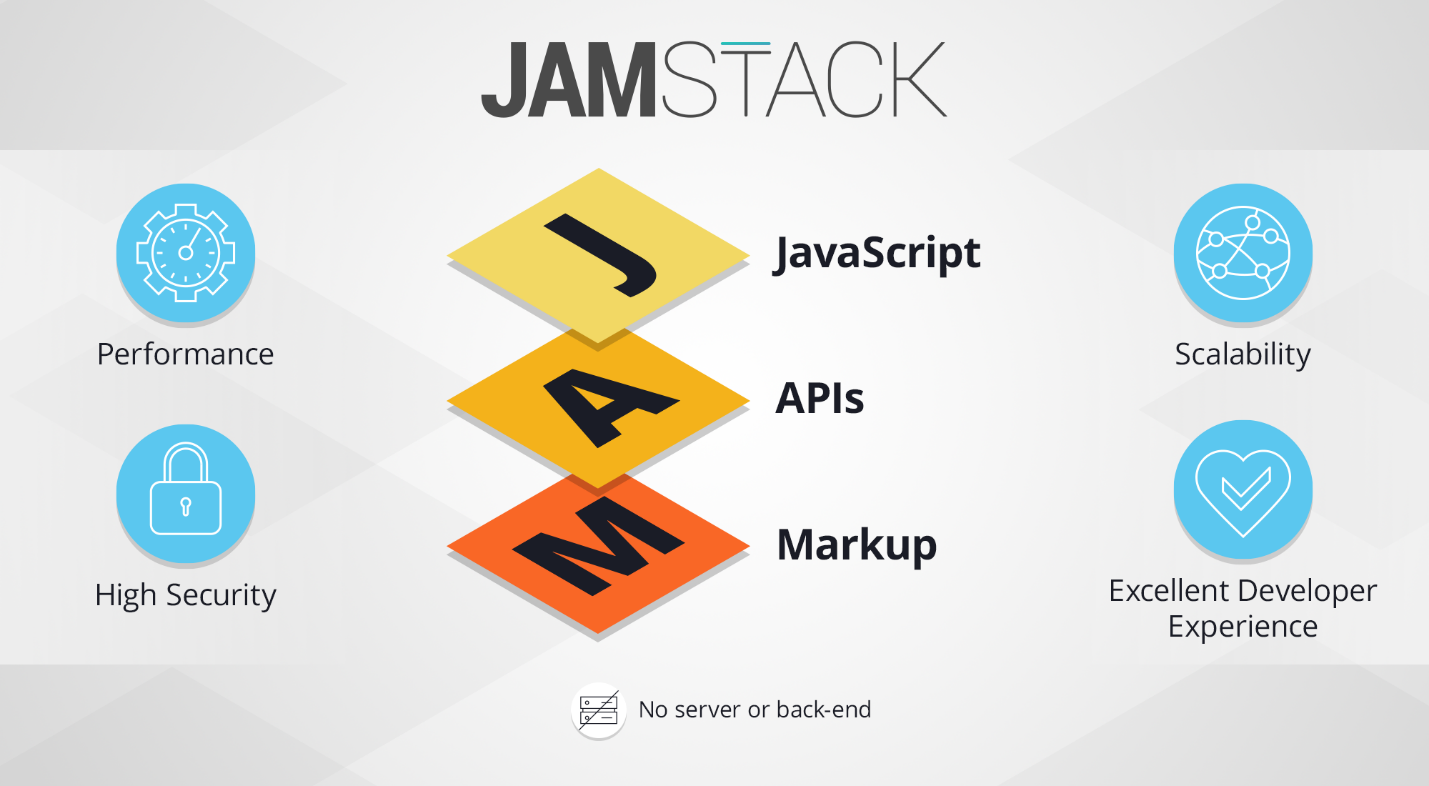 Jamstack: It’s the new web development stack on the block, and for the last few years, it’s been the talk of the town. If you’re involved in web development, you’ve no doubt at least heard of the Jamstack, a catchy acronym that stands for JavaScript, APIs and Markup, which outline the core concepts of the architecture. With a focus on moving away from traditional CMSs that rely on dynamic server-side applications to more modular client-side stacks, Jamstack accomplishes this by using: Javascript to handle any dynamic programming during the request/response cycle, all on the client side.

APIs, either custom built, SaaS or third-party are accessed over HTTPS with JS in order to handle any server-side functions or database actions.

Markup files are pulled by static site generators to create HTML files that can contain JavaScript and style, which act as templates that are pre-rendered, ready to be called by a user. After the initial load, the statically generated page can be “turned into” a Single Page Application (SPA), with the JavaScript kicking in, allowing dynamic changes or navigation on the page to be handled by frameworks like React or Vue.

All this culminates in an architecture that delivers the best of both worlds; the high reactivity of an SPA with the fast load times of a server-side rendered application. This also allows a search engine to parse your high-quality content more efficiently, which improves SEO performance.

The bottom line is that this architecture offers better SEO performance, faster load times for users which increases conversions, and a more decentralised system that is both more secure and scalable than previous frameworks. All this and the ability to get away from your traditional CMS platforms, freeing up capital, sounds great right?

Okay sure, but so what? It’s an improvement on previous approaches to stacked web development, but that’s to be expected, we’re always improving our approaches to web design. What makes this architecture so exciting, what’s with the hype? If I’m not a developer, should I really be excited beyond knowing that “Jamstack can save me money”.

Well, yes actually and here’s why.

Why You Should Care.

Jamstack doesn’t just save you money and allow developers to work more efficiently, it has distinct benefits for the entire management hierarchy.

One of the key features of Jamstack is the shift to greater functionality at the frontend, and the abstraction of the backend by using API’s to access different components like databases. One of the main reasons the Jamstack model can do this is the ability to manage content, assets and anything else in the build process on a Git repository. This greatly decreases complexity and allows the CTO to manage a much smoother workflow for his/her developers, in which there is now version control, and a single source of truth for developers to draw from.

Because content in the Jamstack is prerendered and can be pushed directly to CDNs, there are far fewer issues relating to scaling as your infrastructure service provider can take care of guaranteeing fast access to content when required. On top of that, because most of the content is static, cost and security risks are reduced from malicious data injection during production.

Because the Jamstack leverages the use of Git, CDNs, and APIs to handle backend functionality, along with a streamlined workflow, CTOs are free to concentrate on automating the different parts of the production process. This allows the developers to worry less about building infrastructure and working to create real revenue generating web products.

Beyond simply the technical benefits of using the Jamstack, the CMO can rest easy knowing that their top developers and best creatives don’t look elsewhere for opportunity, in order to avoid using traditional CMOs like WordPress or Drupal. In fact, a 2019 study showed that 70 percent of respondents listed Drupal as their most dreaded web framework, with a further 60 percent saying they dread having to use WordPress.

Because of the streamlined and modular structure of Jamstack, CMOs can guarantee web products load instantly, increasing customer retention and conversion. We’ve all been there, we want to purchase something from whomever, and we’re ready to buy, but the page won’t load. What do we do? We go elsewhere. Jamstack ensures this won’t happen.

Now we’ve established that digital content loads faster in the Jamstack, but because it also decouples creative content creation from development, the CMO is able to speed up the product development process, eliminating revenue risks, inherent when applying changes to web products. The team can now rapidly update their digital experiences from simple text corrections to completely new campaigns.

Much of the infrastructure in Jamstack is abstracted, meaning the cloud provider takes in this responsibility. Therefore, the CIO and developer teams only need to learn a single workflow, without needing to create complicated new models for CI/CD pipelines that fit into their cloud providers method.

Because Jamstack allows developers to build the entire server tier into a git push, there is only ever one master branch of the current code, allowing new functions to be developed in sub branches before being approved by the CIO (and whomever else) and merged into the main code. This also removes the need for any more integration between staged and production elements, all while retaining the integrity of the current build.

And of course, control; like we’ve already mentioned a few times, the ability to use Git allows for full version control, and the ability to build subbranches of the code that can fully implement new features. These can be thoroughly reviewed before integration all in a single CI/CD pipeline.

If you have any questions, please get in touch with me. @akshaysura13 on twitter or on Slack.

Register for our Free Webinar on: Lean ‘n Mean Jamstack 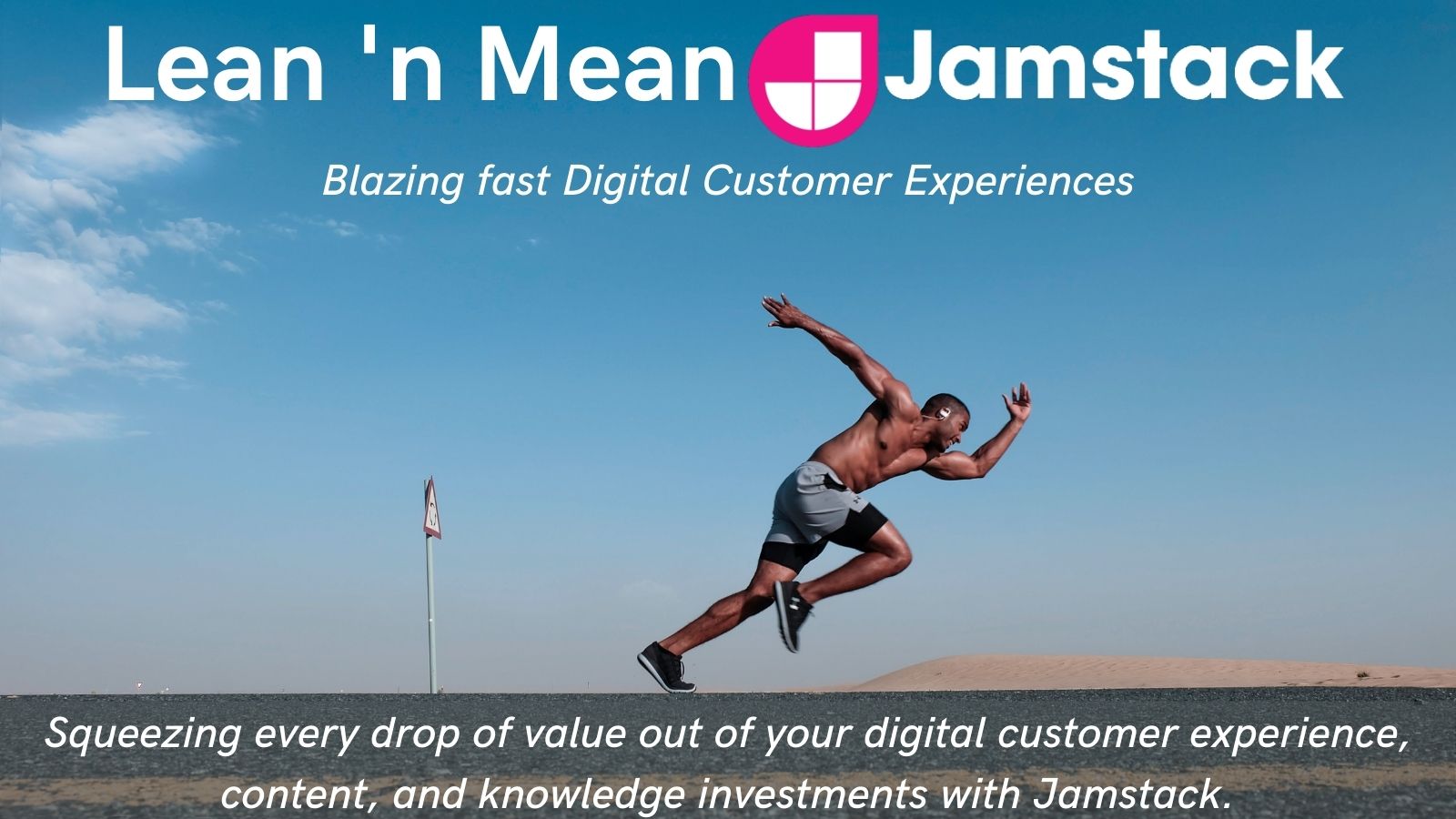